How to Backup and Restore LG G5

The LG G5 and Galaxy S7 Edge are the two most interesting phones of this year's Mobile World Congress show. As LG’s new flagship product, G5 hardware configuration is very powerful, in addition to its auxiliary accessories are also very rich. The South Korean company changed the way we access the battery, inventing a cartridge-like input so you don't have to remove the back cover.

The device runs Google Android 6.0 Marshmallow, and while the interface is pretty similar to what we've seen before from LG, there is one interesting omission: the app drawer. With the G5, every app you download will display on your home page, similar to Apple iOS and some ZTE phones.

My colleague Jason is a big fan of the LG. After seeing the introduction of the G5, he decided to buying a G5. But, after a few days, he found it is inconvenient to backup data on LG G5, since there is no native data backup app on the device. I told he to use the third-party app - Syncios Data Transfer, which could backup more than 10 tyeps of data on android device with one click. Of course I am Syncios's old user, use it to do routine backup on my Samsung Galaxy S5. Syncios offer both Windows Version and Mac Version for users to do LG G5 data backup and restore, including contacts, photos, apps, music, video, SMS, MMS bookmarks, etc.

Here is how to backup and restore LG G5:

Part 1: How to Backup LG G5 Data to Computer

First you should from the official website to download and install the Syncios LG G5 backup executor. After successful installation, run it. This will pop up a window, as shown in the picture. Choose the features you need: Click "Backup" button. 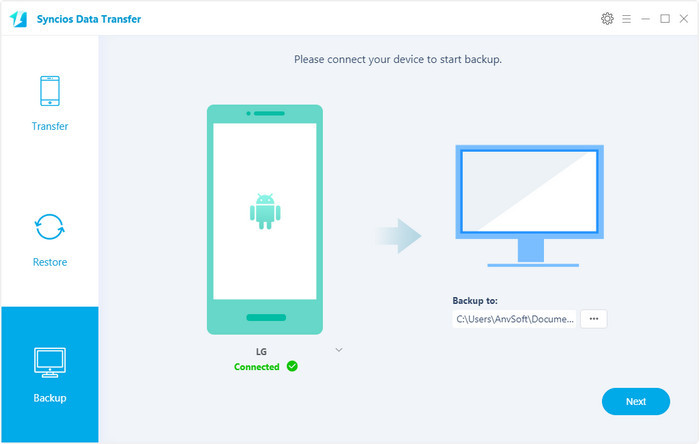 Step 2. Choose The Files You Want to Backup

Connect your LG G5 to computer with its USB Type-C cable, which could increases the transfer speed. After connected, the system will automatically scan the file directory which can be transferred from your LG G5 mobile phone to computer, and all the catalogues are selected, including apps, photos, music, videos, text messages, call logs, contacts, calendars, etc. To backup LG G5, click "Next".
Select the [...] button that appears beneath the computer icon and select the location where you would like all data to be saved. 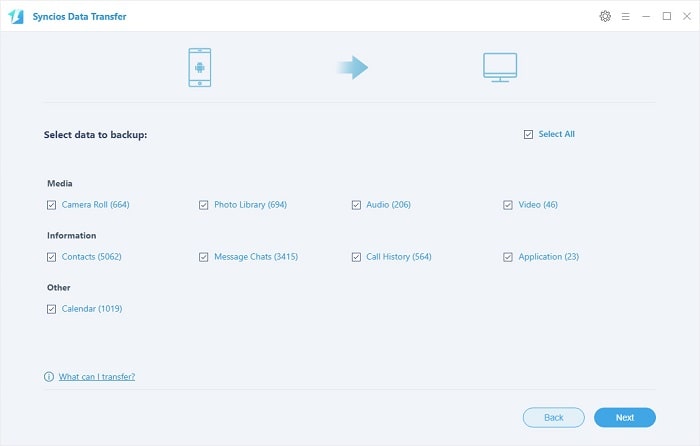 When the extracting process is done, you will get the pop up message Copy Completed. Click OK, the backup folder will automatically open.

It enables you to restore LG G5 whenever you want. To restore LG G5, open Syncios Data Transfer, on the homepage, click on "Restore", choose Syncios Backup. 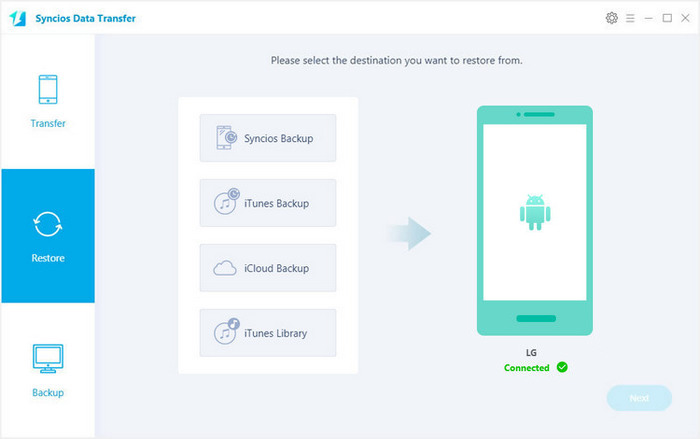 Now you can select your previous backup files from the left panel . Check data you would like to move to your G5 on the middle checkbox. Click Start button, all of your selected files will be restored to the target device.