How to Transfer Data from Samsung to Motorola Moto X4

In 2017, Motorola is reviving the Moto X lineup with the launch of the Moto X4 without the trademark the Moto Maker service and the customisable design. Still, the fourth-generation Moto X4 promises to offer a premium design and sold performance for the price.

To transfer contacts, messages, music, videos, photos, call histories, apps and more from old Samsung to new Moto X4 effectively, we need a powerful phone tool to help us in reducing time wasting. This article will provide you a simplified guide on transfer Samsung data to Moto X4. Two steps are enough for you to finish trnasferring. And we provide one more step for you to transfer data from Moto X4 to Samsung if you need.

Syncios MotoTransfer is a professional iOS & Android synchronizing tool, which enables you to backup or transfer messages, contacts, call logs, music, video, audio and other files between iOS & Android devices and computer with only few clicks or directly phone-to-phone transfer. If your iPhone still works, then we can simply transfer all contacts, sms, music, video, call history from Samsung to your new Moto X4 with this handy Mobile Transfer Tool. Please follow the steps below:

Download and install the compatible version of Syncios Android Transfer on your computer from below, then launch the program. To transfer your contacts from Samsung Galaxy S4/5/6/7 to Moto X4, click "Next" button under "Phone to Phone Transfer" section on the homepage. 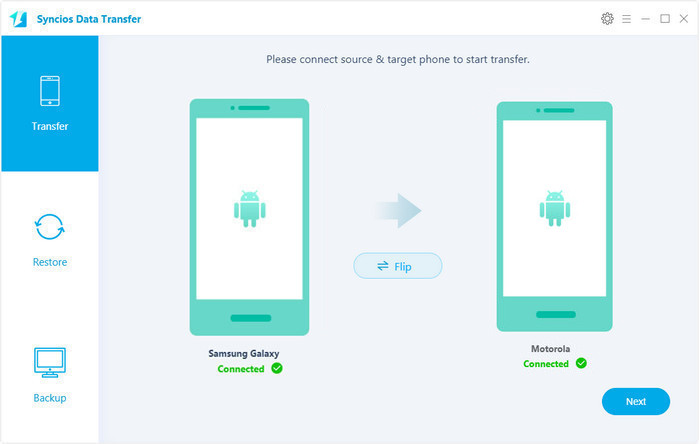 Connect both of your phones to Syncios via USB cables, Android devices can also be connected via WiFi. To move data from Samsung to Moto X4, simply check the data you want on the middle panel after Syncios successful loading your data. Then, click Next.

The Samsung will be showed in left panel and Moto X4 could be detected as target phone, otherwise, you can click on "Flip" button to exchange the source and target device . 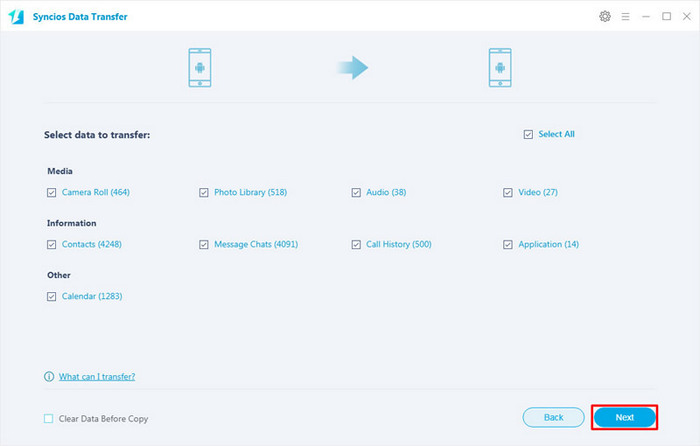 The transferring process would be launched automatically and after the transfer progress is done, click "OK" to end it. Please make sure both of your phones's connection are active during the whole process in case of some unknown errors.

Now, you can see the Samsung contacts/sms/music and more on new Moto X4. Download the handy tool and follow the steps to transfer data from Samsung to new Moto X4.