Huawei finally launched the successor to last year’s Ascend P7 smartphone, and the Huawei P8 is everything we imagined based on months of rumors. The new flagship looks sleek, is powerful, and comes with many unique features. The company also unveiled the P8 Max, a massive, phablet version of the device.

Huawei's new P8 is the company's best phone to date, but don't confuse it with a bleeding-edge mobile like the Samsung Galaxy S6 Edge. It doesn't have the S6 Edge's curved glass screen and it's not quite as powerful, but it does carry a far more affordable price tag without forcing you to compromise on performance.

Replacing the P7, and sitting at the top of Huawei's range of smartphones, this Android Lollipop phone squashes a 5.2-inch full HD display into an attractive one-piece metal body and includes an 8-megapixel front-facing camera and a 13-megapixel camera on the back. Why did you dump your HUAWEI P8 to iPhone 6

So why you still would like to switch from HUAWEI P8 to iPhone 6? To get features like Touch ID and Apple Pay? Or to Apple Stores and Apple Care? Or to quality and coherence of the software? Or just a simple answer, because to own one you've got to really want it. Just do it! When you are switching from Android HUAWEI to a new iPhone, the first thing you need to do is transferring all important files from your old phone. However, the task is not so easy-handling. You should know that although some phone company can transfer contacts for you, all other files can not be transferred at the same time.

Syncios Data Transfer can be your best choice to transfer all data from HUAWEI to iPhone. With the HUAWEI to iPhone transfer tool, you can easily transfer your contacts from your huawei to the new iPhone. In addition to transfer contacts, it also enables you to transfer other files including call logs, SMS, music, video and photos in just one click.

Firstly, you should download and install the HUAWEI to iPhone Data Transfer tool on your PC, which has both Windows version and Mac version.

Step 1: Run the HUAWEI P8 to iPhone Data Transfer Tool on your PC

Run the HUAWEI P8 to iPhone data transfer tool on the computer. Select ‘Transfer’ mode which will be on the homepage and simply click Start button to move content from HUAWEI to iPhone. You will see the main screen shows connecting devices is required. 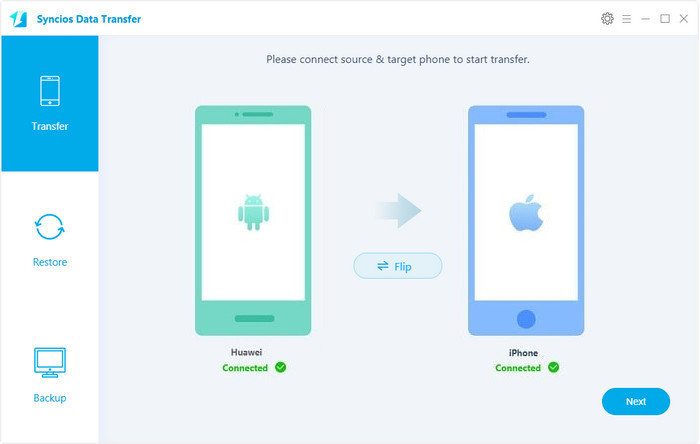 Step 2: Connect both your HUAWEI P8 and iPhone

Connect both your HUAWEI device and iPhone to the computer with USB Cables. Please wait for a while for the devices to be detected. This Huawei to iPhone Transfer tool will quickly recognize the two phones. Then, your Huawei P8 is displayed as "Source" Phone on the left, and your iPhone, the "Target" Phone on the right.

Phones should be displayed in the place of ‘Source’ and ‘Target’, the data will transfer from ‘Source’ to ‘Target’. When clicking "Flip" between the phones, you can change their places to transfer contacts, videos, text messages, photos and music from iPhone to HUAWEI phone or tablet. 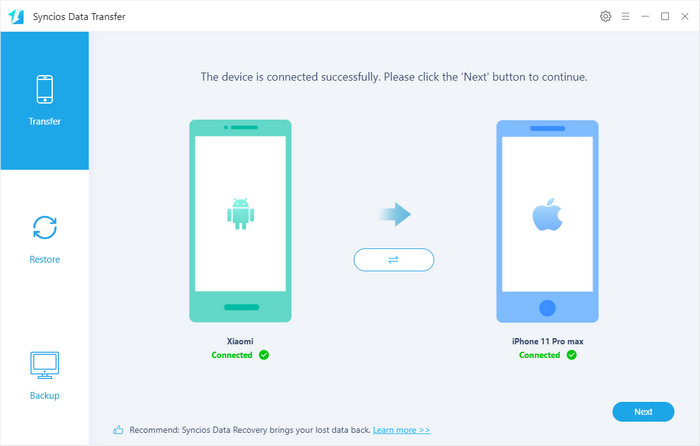 Please make sure iPhone 6 is in the Target Device pane. The program will load the files on your source HUAWEI phone. Then tick the data you want to transfer and click on "Next". A message is going to be presented to you saying Copying Data. After a while, the data you chose will be transferred to your new iPhone.

Just take Huawei P8 to iPhone transfer as the sample, other Huawei devices are just the same. Try Huawei to iPhone Transfer to transfer data from HUAWEI to iPhone in 1 click!

Transfer Data from Huawei P8 to iPhone 6/ 6 Plus